Symposium: The Subjects and Objects of Humanitarianism 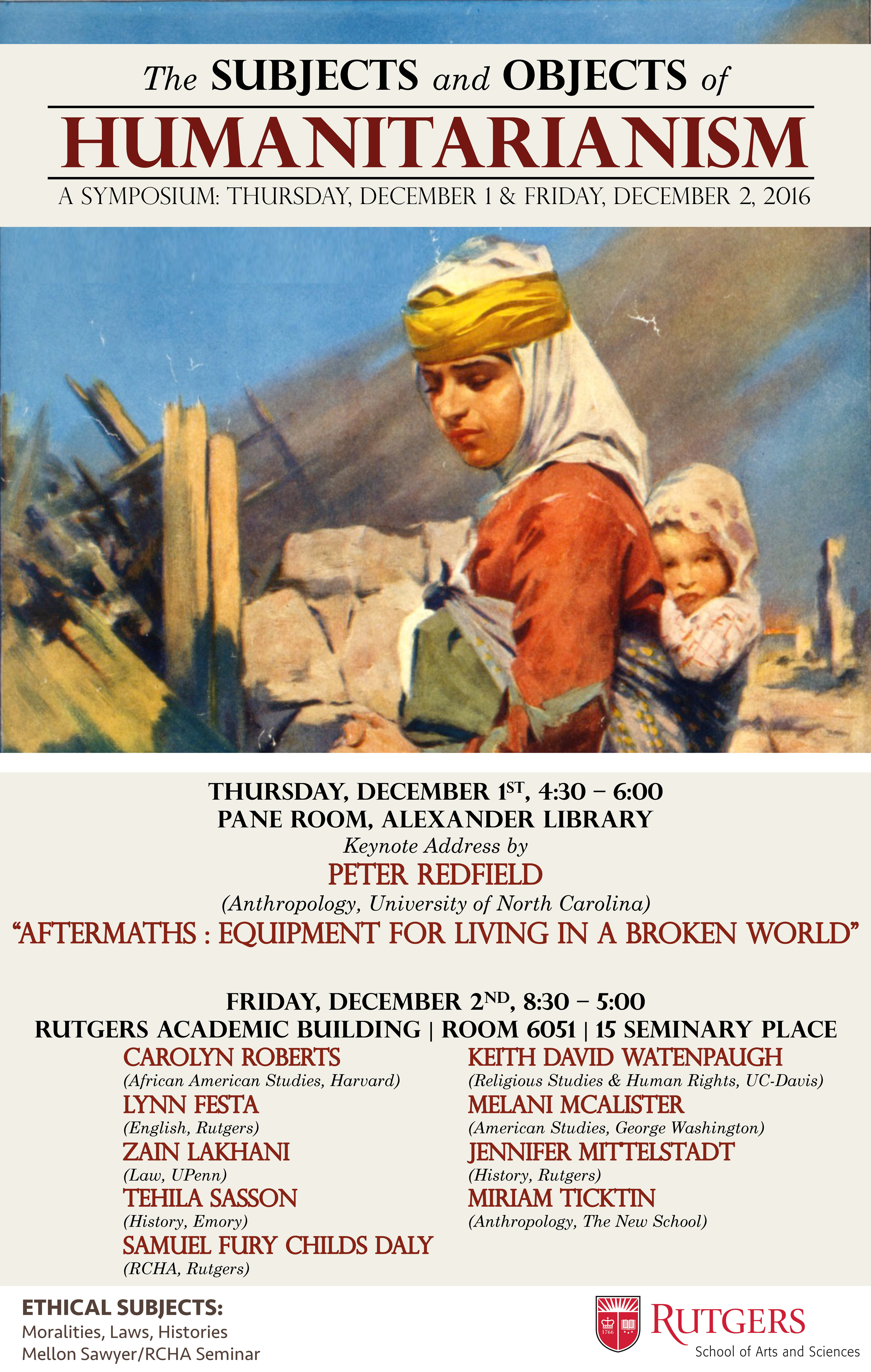 "Aftermaths: Equipment for Living in a Broken World"

Diffuse claims about human rights and humanitarian values permeate international affairs and corporate initiatives. The globalization of health research has shifted emphasis from national populations to those suffering from specific conditions, even as crisis moments reveal the enduring appeal of security discourse. They also inspire ingenious, minimal designs for objects like modest shelters, water filters or low- cost incubators, devices that offer little prospect of systemic response but suggest an alternative scale of vision. Drawing inspiration from Steven Jackson’s call for “broken world thinking” in technology studies, my goal is to recognize the productive centrality of breakdown and repair, along with an ethics of care.

This paper mobilizes a wide-ranging multilingual source base to illustrate how precolonial West African indigenous epistemologies of health and healing suggest an ethics of care that was instrumental in European survival. In a challenge to Western discourses of dominance and sedimented notions of African dependency, precolonial West African healers starkly recalibrate the genealogy and geography of humanitarianism, whose nascent itineraries crisscrossed the West African littoral for centuries.

"The Drowned, the Saved, and the Forgotten: Crimes against Humanity and the Humanitarian Imagination"

Examining the international humanitarian response to the genocide of the Ottoman Armenians (1915-1922), I argue that modern humanitarianism and the legal and ethical concept of the crime against humanity have a complex and intertwined history that has particular relevance to concepts like humanitarian neutrality, humanitarian governance and the role of justice in relief and what would be called now rights-based development.

"Homosexuality and Humanitarianism: The Case of Rick Warren in Africa"

This paper analyzes the links between megachurch pastor Rick Warren’s humanitarian work and anti-homosexuality politics in Uganda in the early 21stcentury. Warren’s case illuminates how US-based evangelical humanitarianism, transnational sexual politics, and the growth of Christianity in Africa have become intimately intertwined.

"Human Trafficking as a Politics of Sovereignty: Migration and the Humanitarian State"

This paper tells a crucial yet neglected story of the relationship between immigration reform and humanitarian sovereignty. Specifically, it explores how anti-immigration sentiment shaped human trafficking legislation at the turn of twenty-first century. My paper traces the role of anti-immigration measures in the Trafficking Victims Protection Act of 2000, and explores the Act’s subsequent deployment as a tool of migration reform.

The history of the fair trade shop may seem like a marginal tale within the broader story of aid, but it is rather illuminating for what it teaches us about history of humanitarianism and the capitalism after the end of empire. The story of the fair trade shops add an crucial aspect to the political and moral economy of aid in the second half of the twentieth century, creating what I will call “affective economies,” which connected humanitarian ethics to everyday purchase.

"Humanitarianism and its Political Others"

This talk explores the politics that are constituted by or alongside humanitarianism, expressly or inadvertently. I will discuss two genres of politics: first, I focus on border walls, and think about how these serve in refiguring humanitarianism; second, focusing on the intersections of aesthetics and politics, I explore new political grammars that are emerging to counter humanitarian logics.